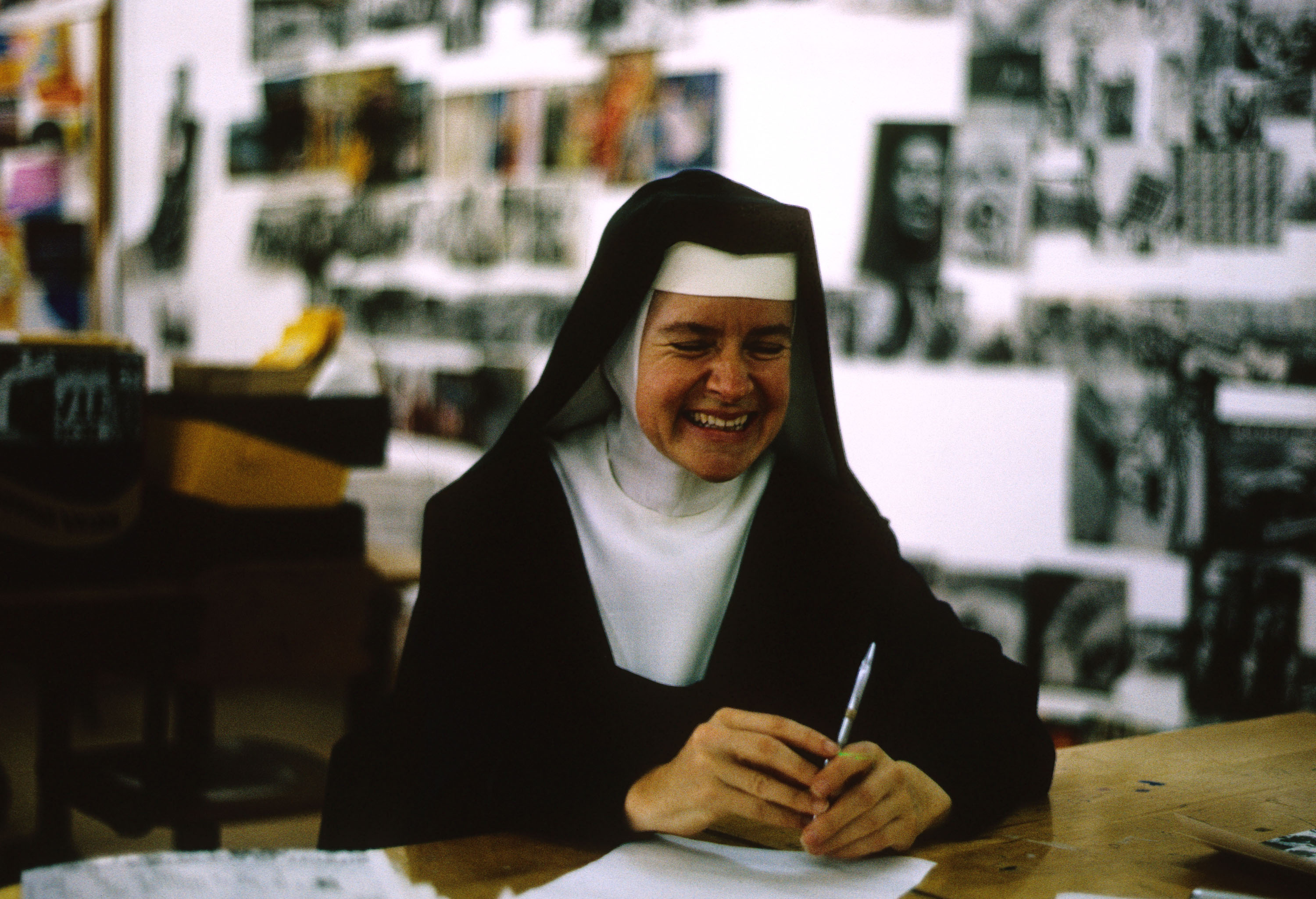 Corita Kent (1918–1986) was an artist, educator, and advocate for social justice. At age 18 she entered the religious order Immaculate Heart of Mary, eventually teaching and then heading the art department at Immaculate Heart College. During the course of her career, her artwork evolved from using figurative and religious imagery to incorporating advertising images and slogans, popular song lyrics, biblical verses, and literature. Throughout the ‘60s, her work became increasingly political, urging viewers to consider poverty, racism, and social injustice. In 1968, she left the order and moved to Boston. After 1970, her work evolved into a sparser, introspective style, influenced by living in a new environment, a secular life, and her battles with cancer. She remained active in social causes until her death in 1986. At the time of her death, she had created almost 800 serigraph editions, thousands of watercolors, and innumerable public and private commissions. 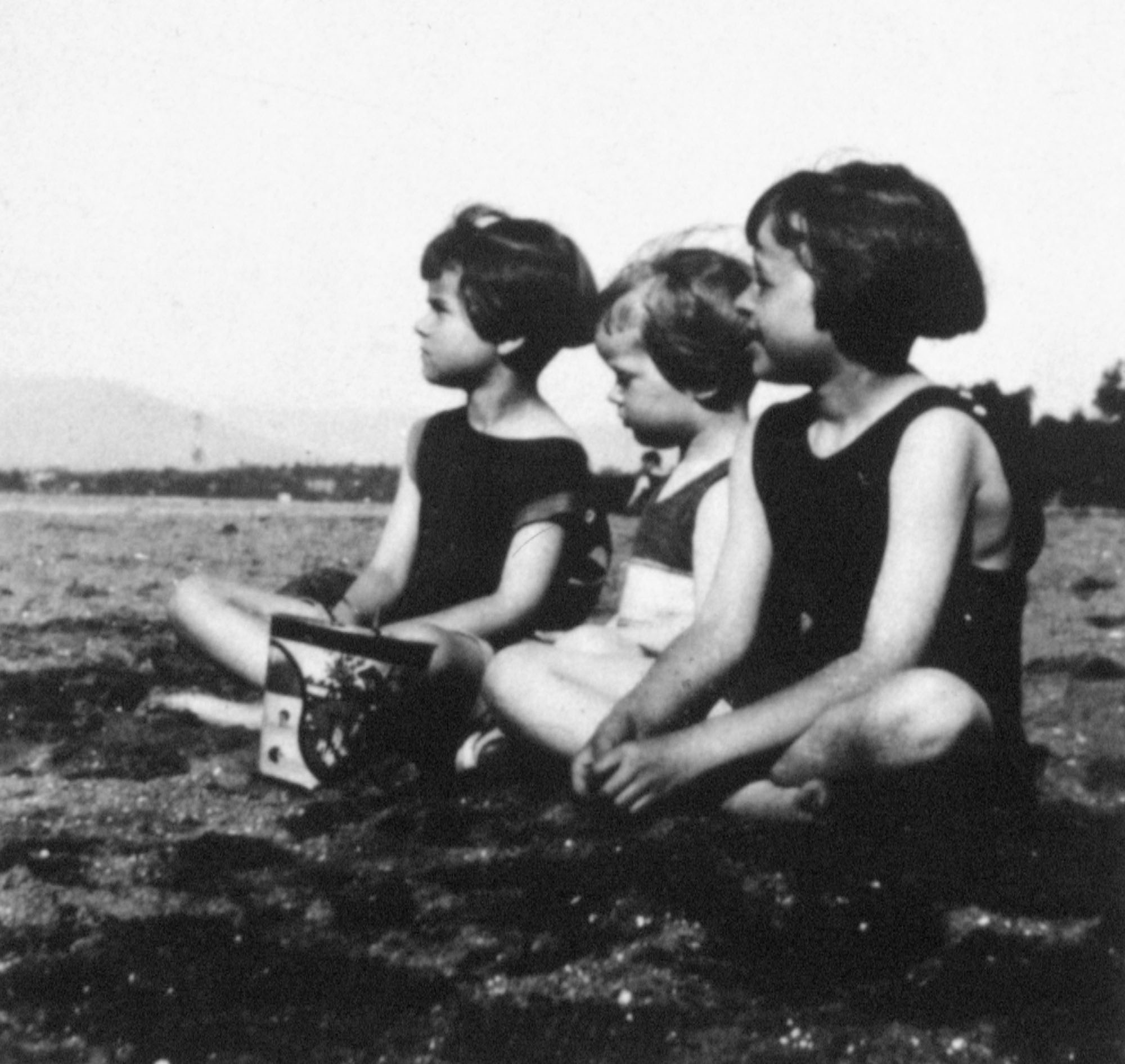 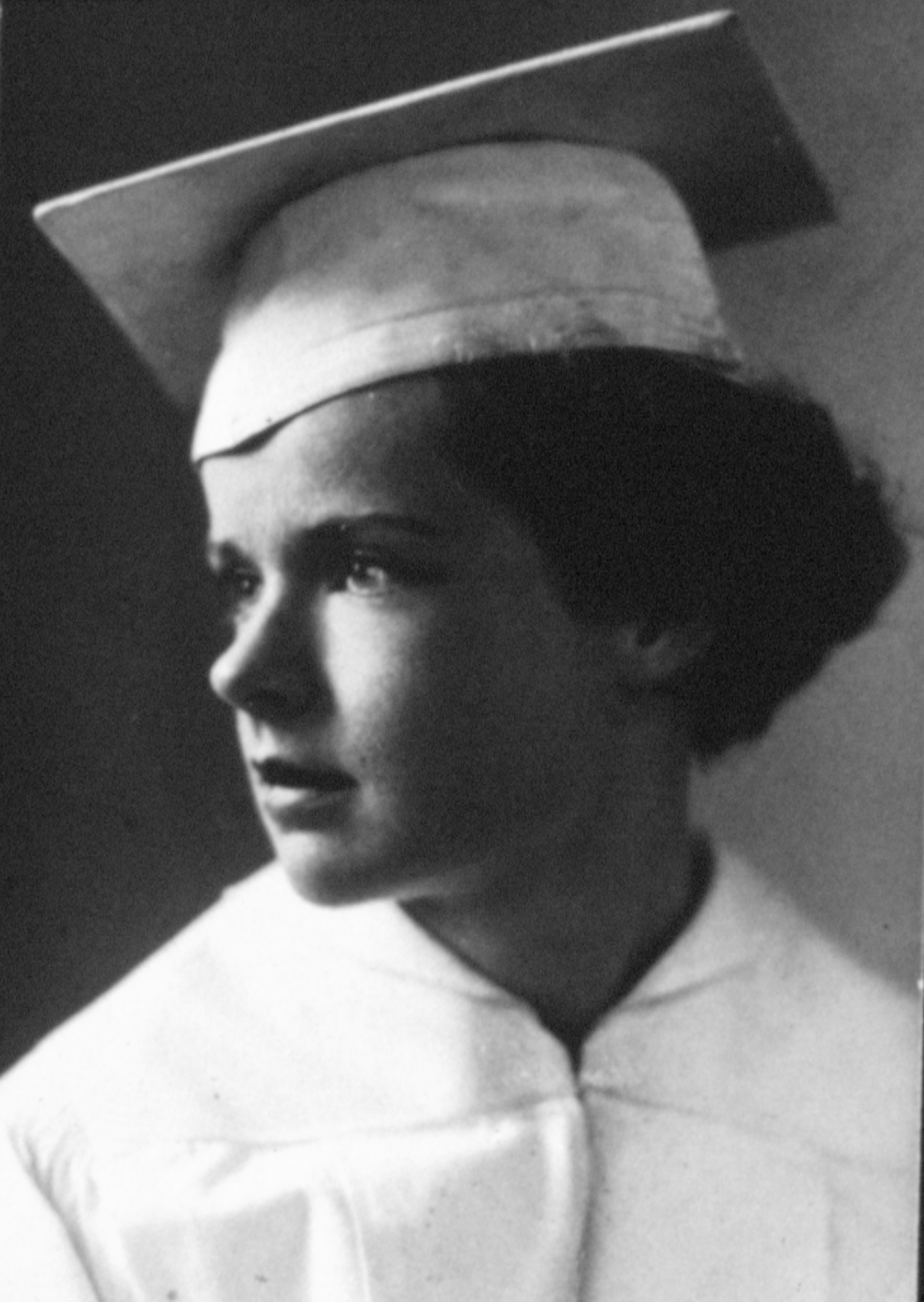 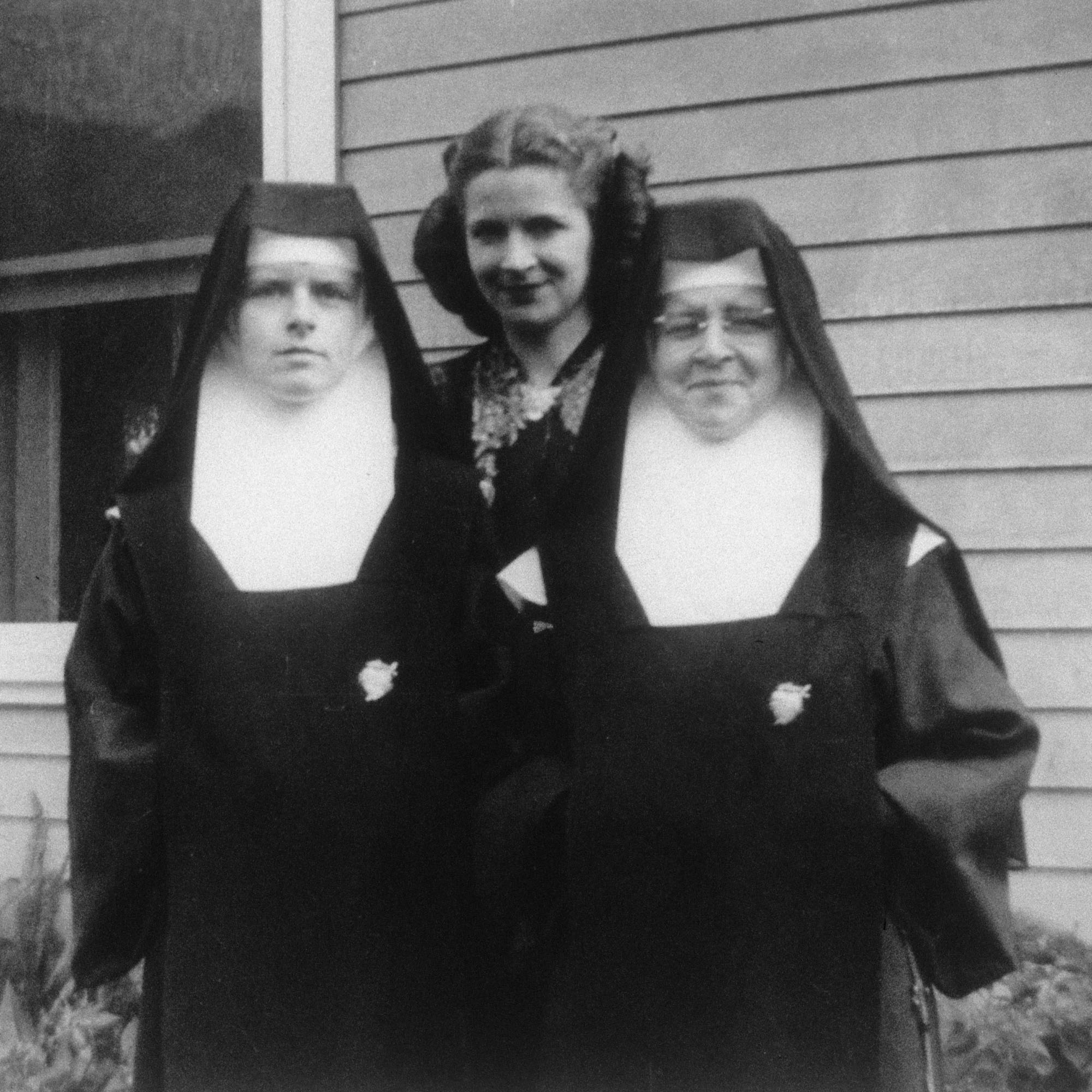 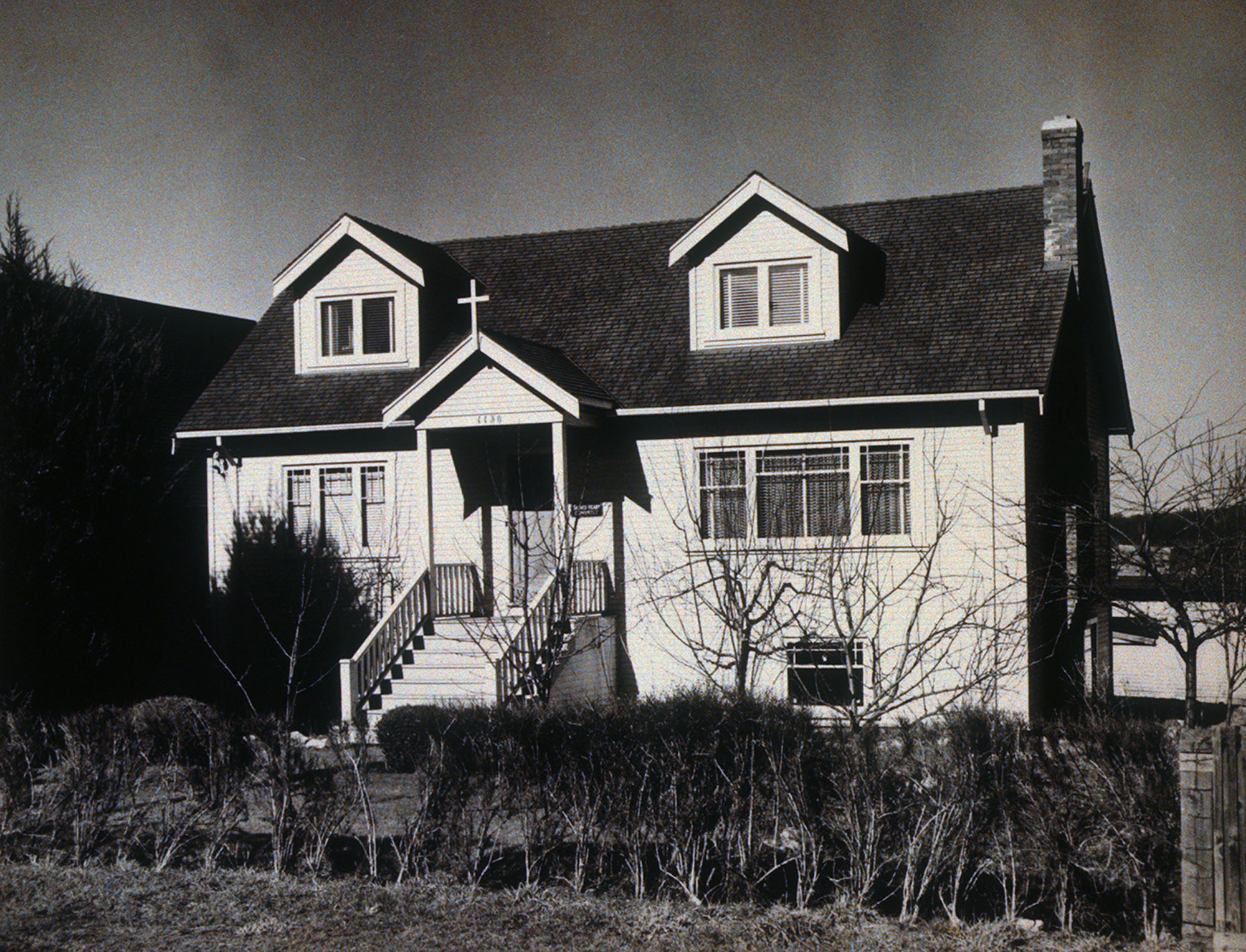 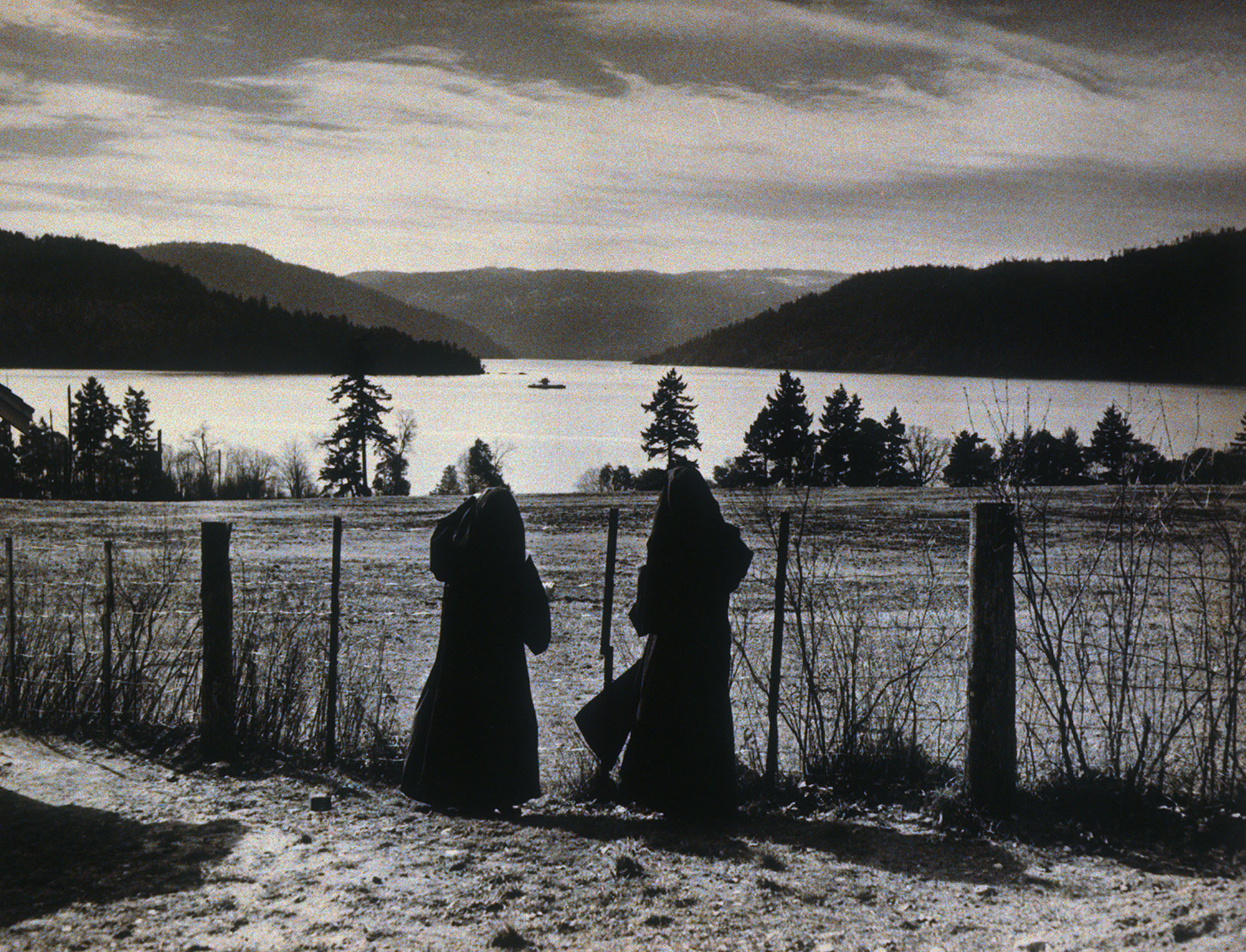 1947
Corita is called back to IHC to join the faculty of the Art Department, she begins graduate school at University of Southern California.
1951
Corita graduates from USC, begins screenprinting near the completion of her master’s degree. 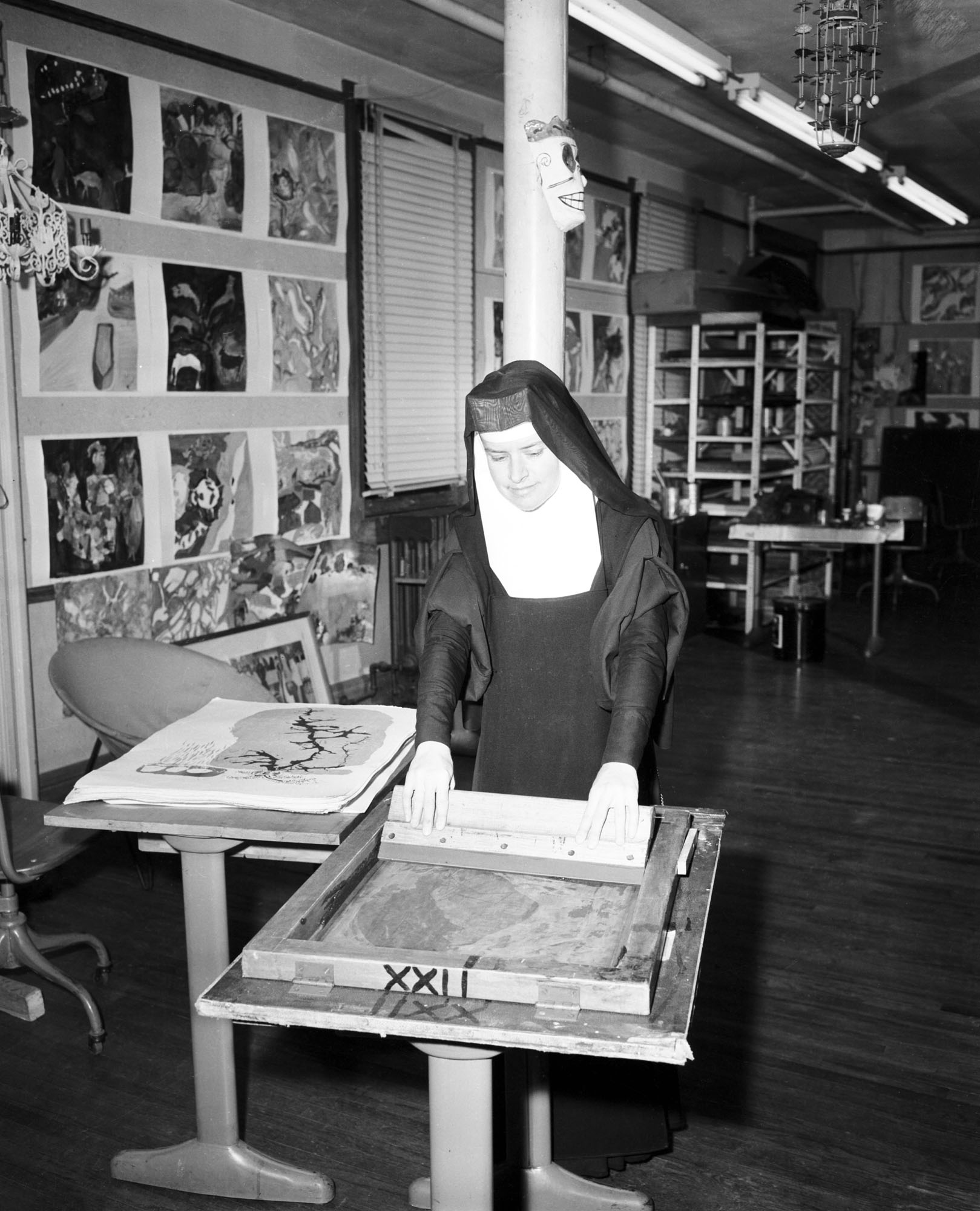 1952
Corita wins first prize in both the Los Angeles County print competition and the California State Fair for the lord is with thee. 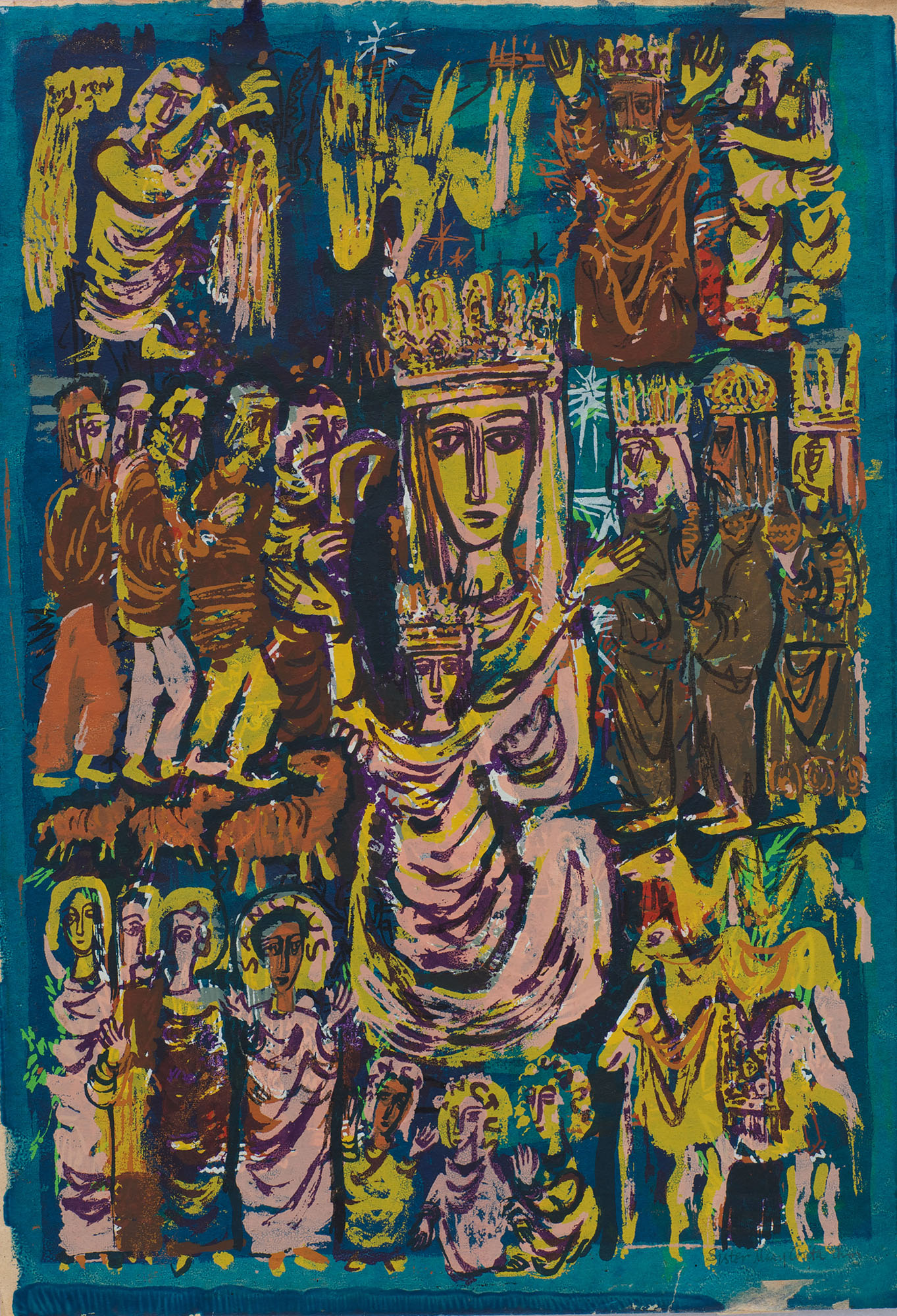 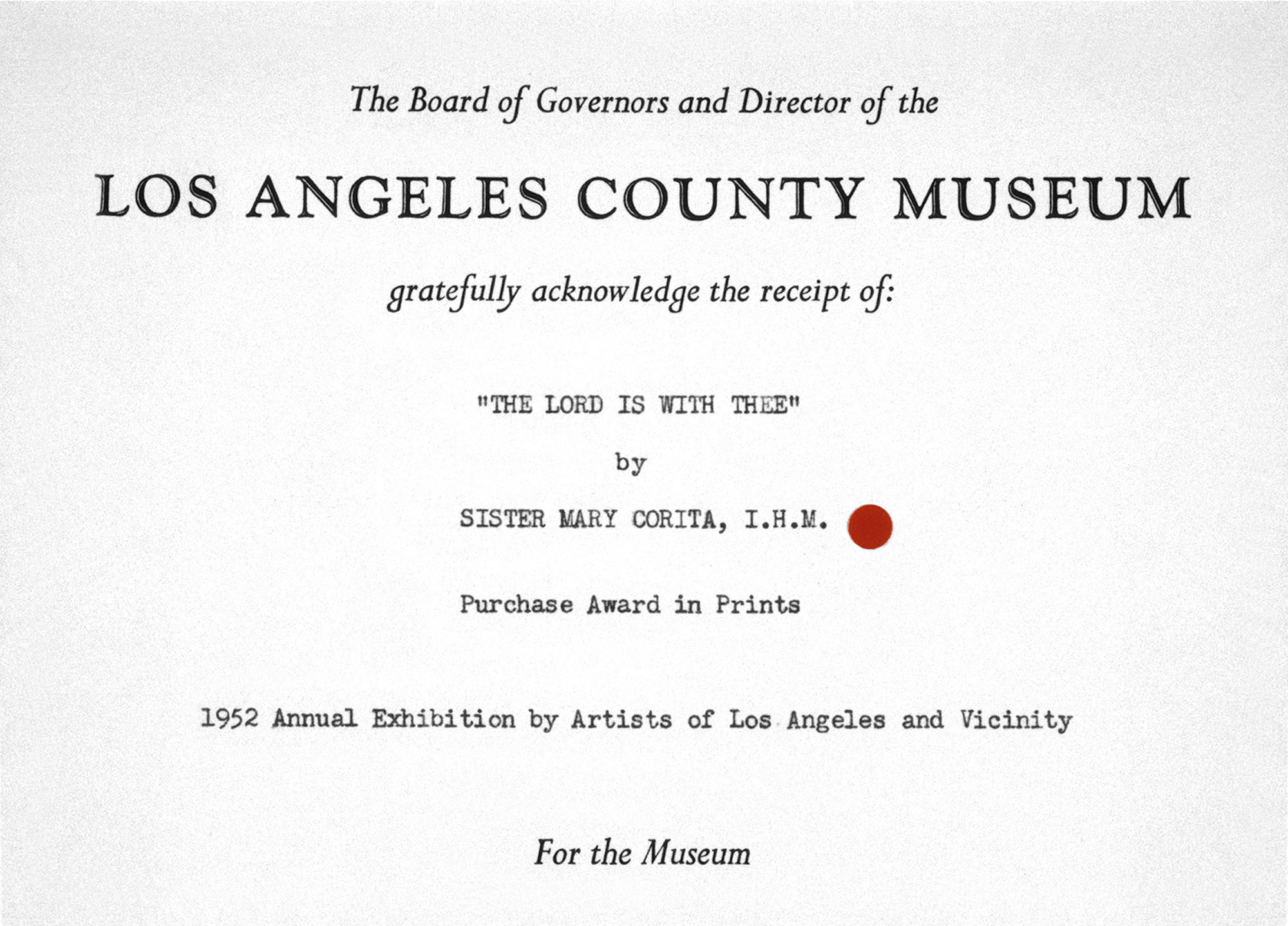 1952–1959
Corita continues working and teaching at IHC, her reputation as an artist and teacher growing. 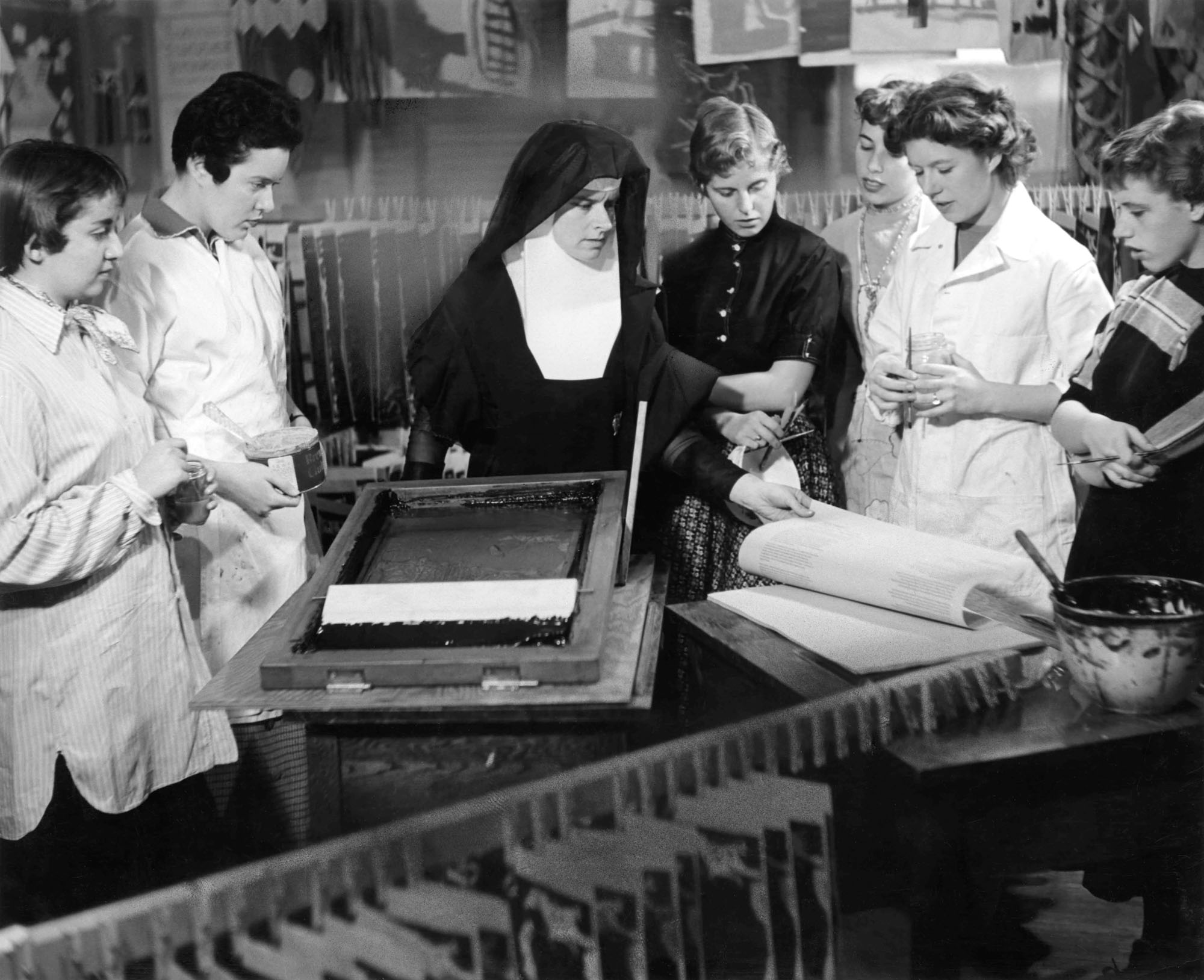 1959
Corita and Sister Magdalen Mary, her mentor, go on a trip to Europe and Egypt. Sister Mag acquires many pieces for the Gloria Collection of folk art. 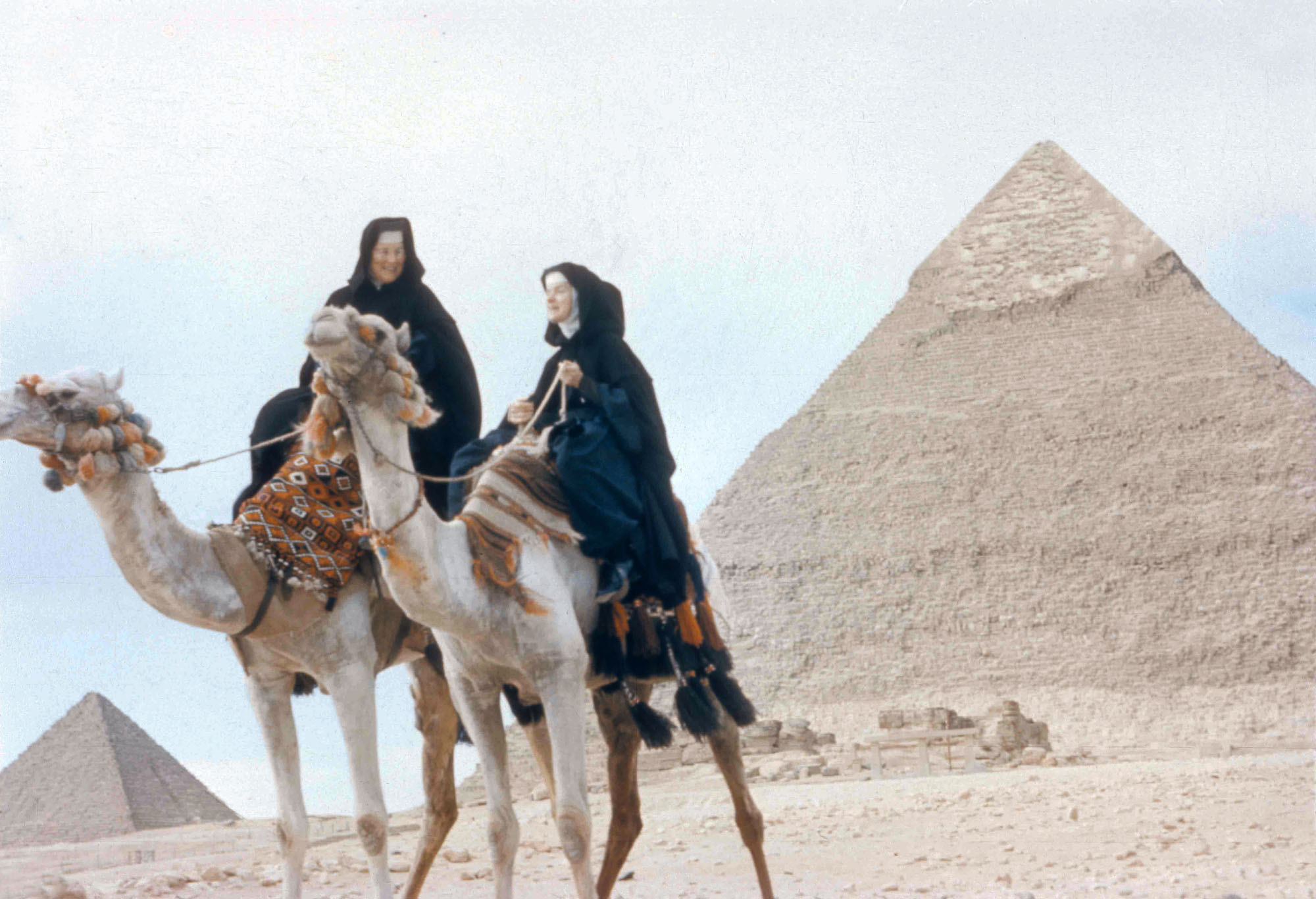 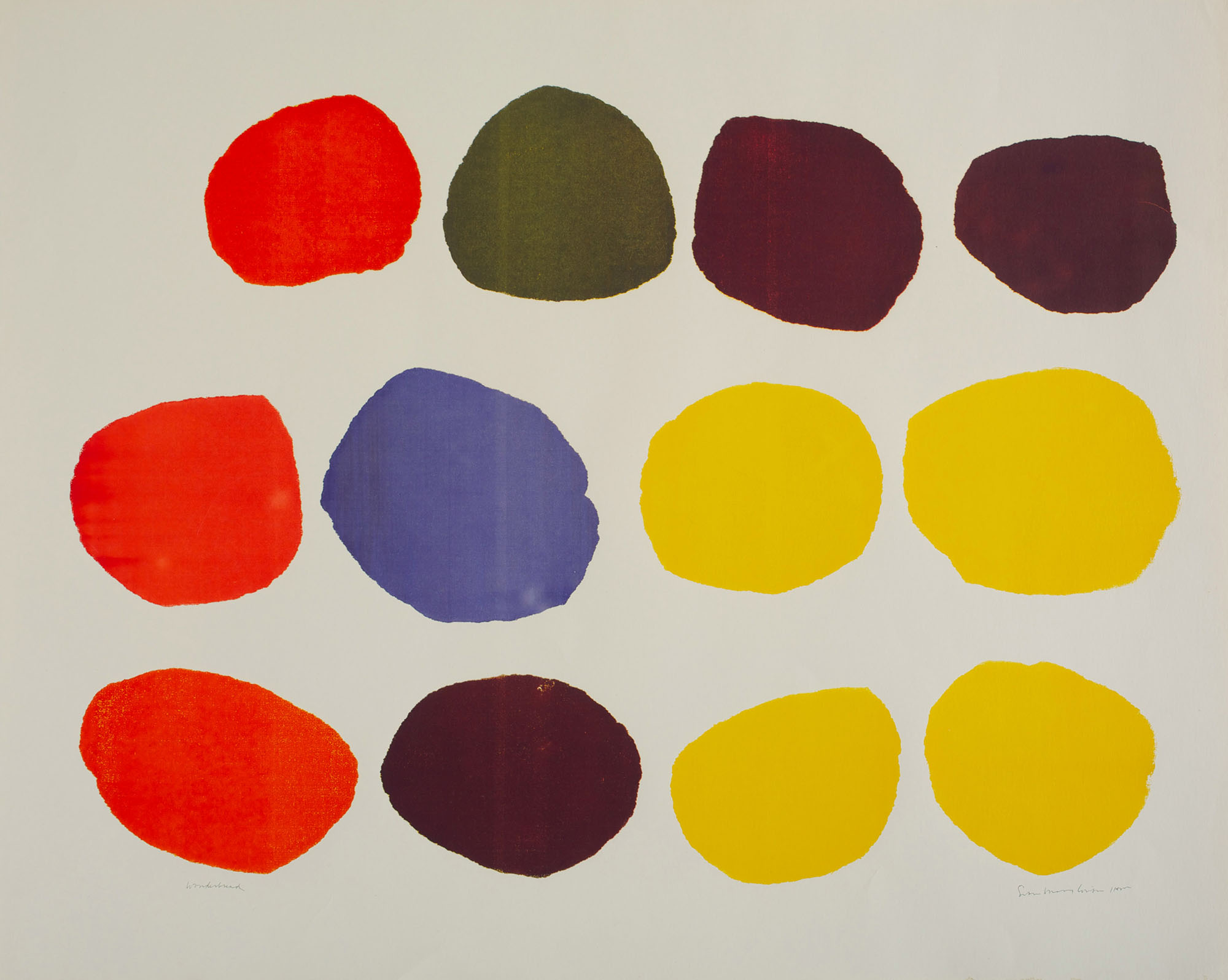 1963
Corita is commissioned to create a banner for the Vatican Pavilion at the 1964 World’s Fair in New York. 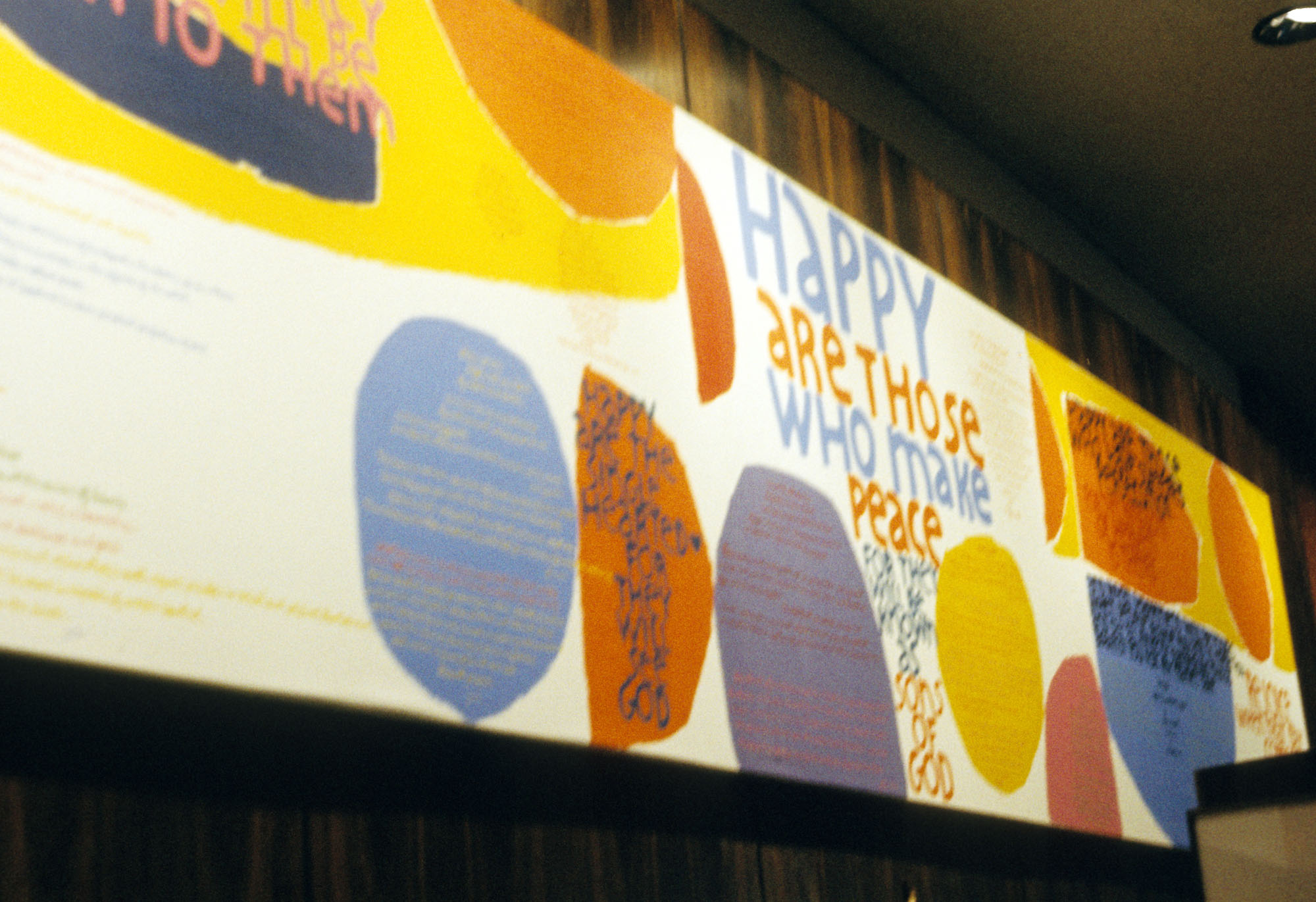 1964
Corita becomes chair of the IHC Art Department and takes over planning for the Mary’s Day celebration. 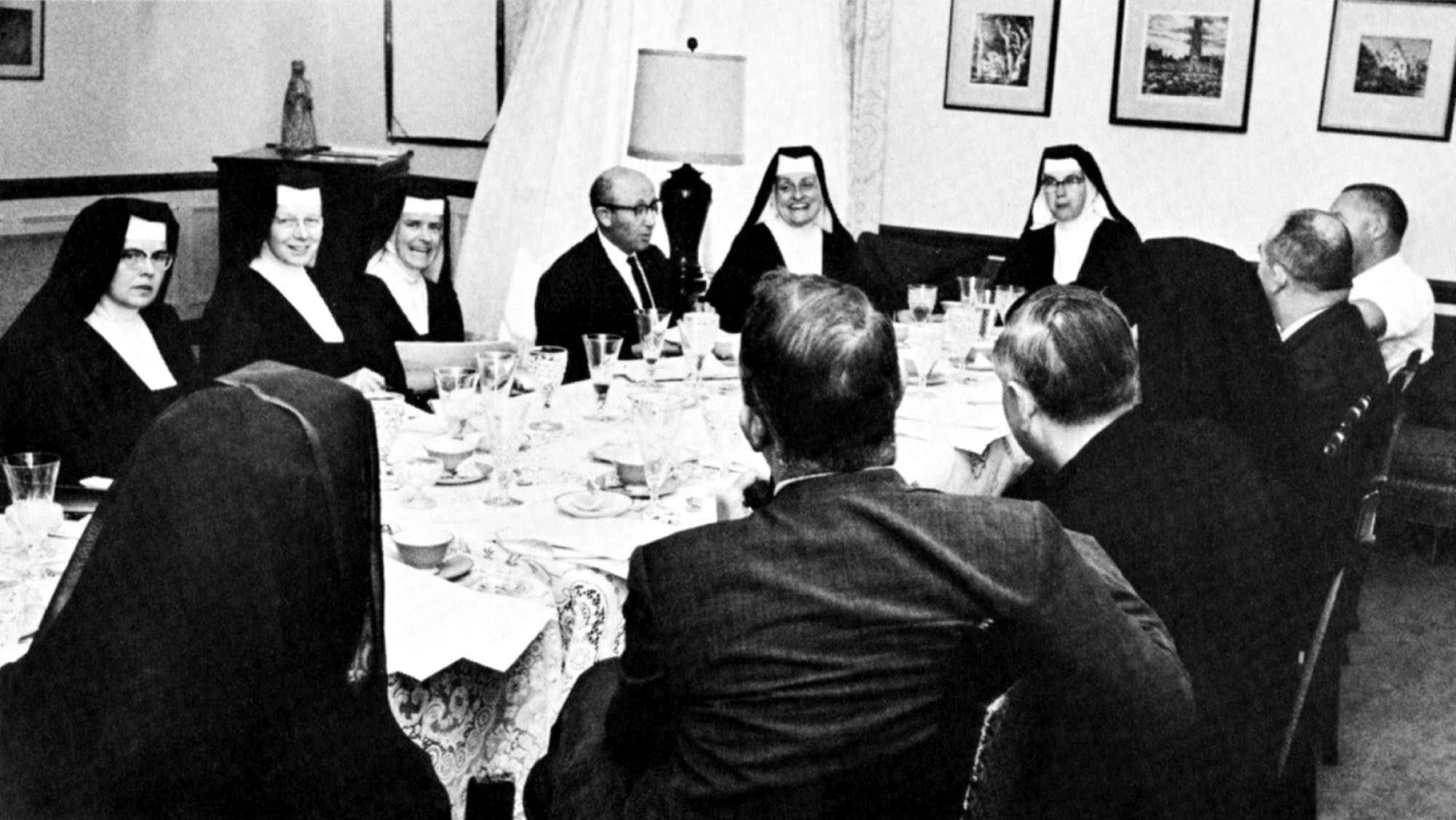 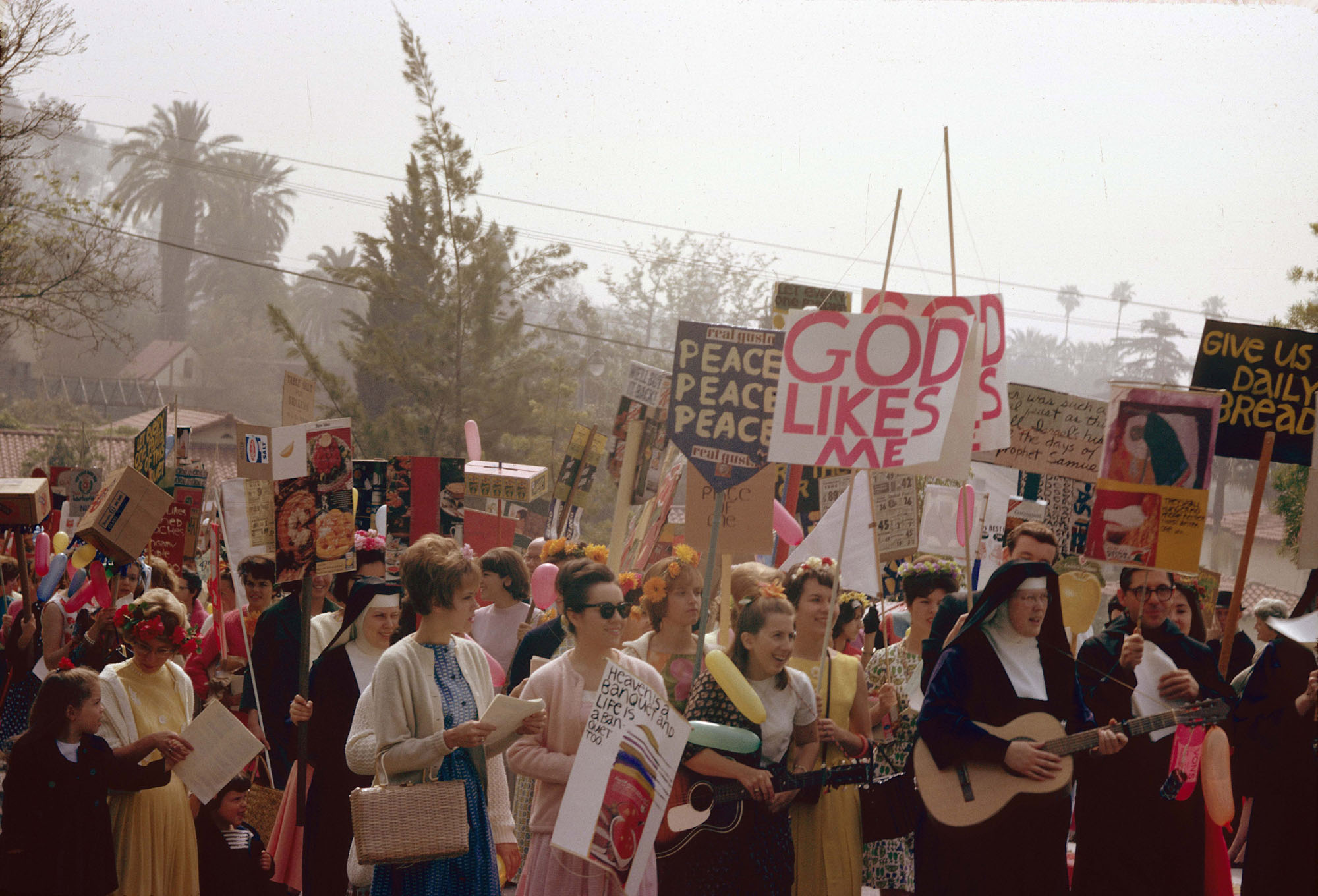 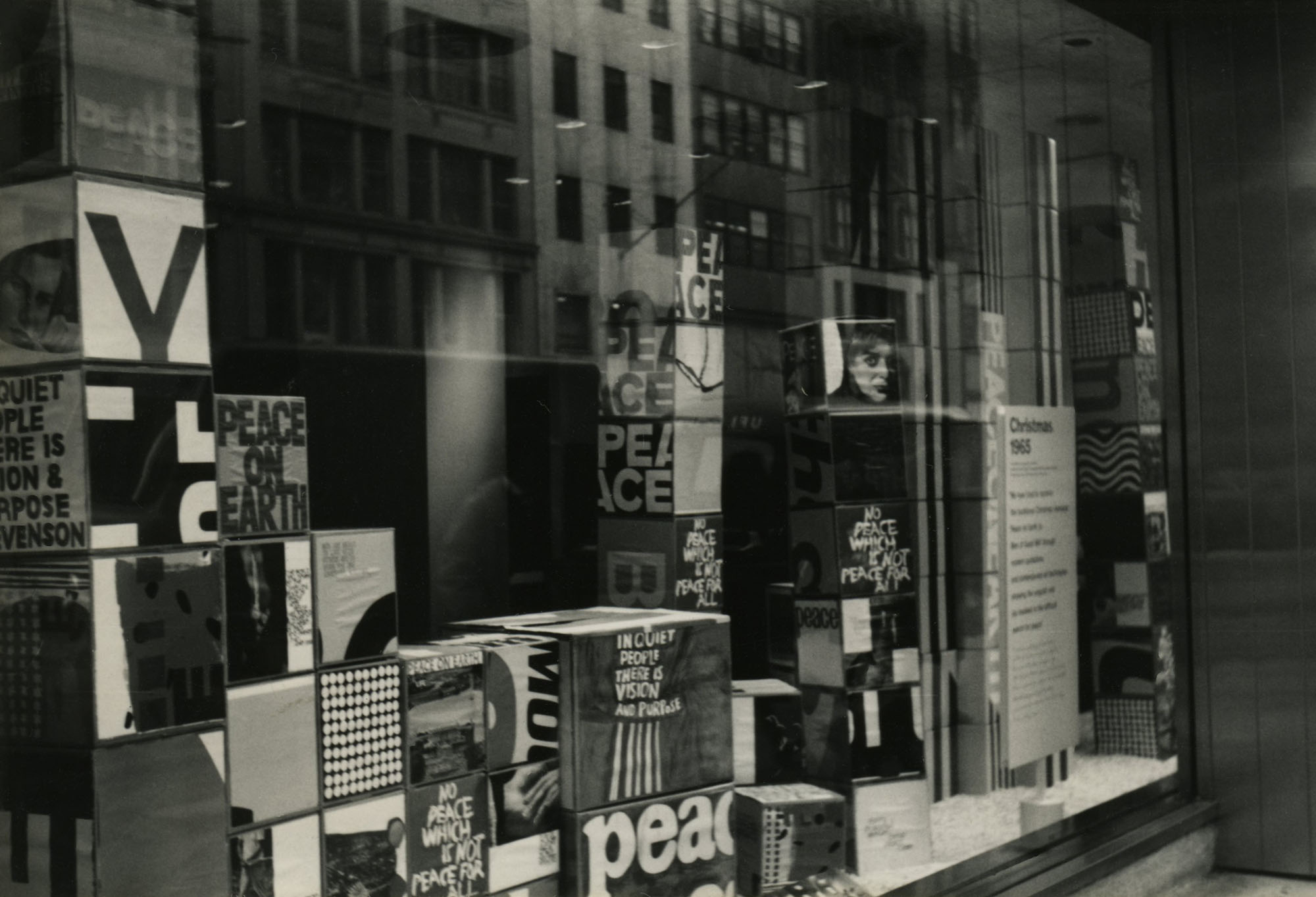 1966
The Los Angeles Times names Corita one of nine Women of the Year. 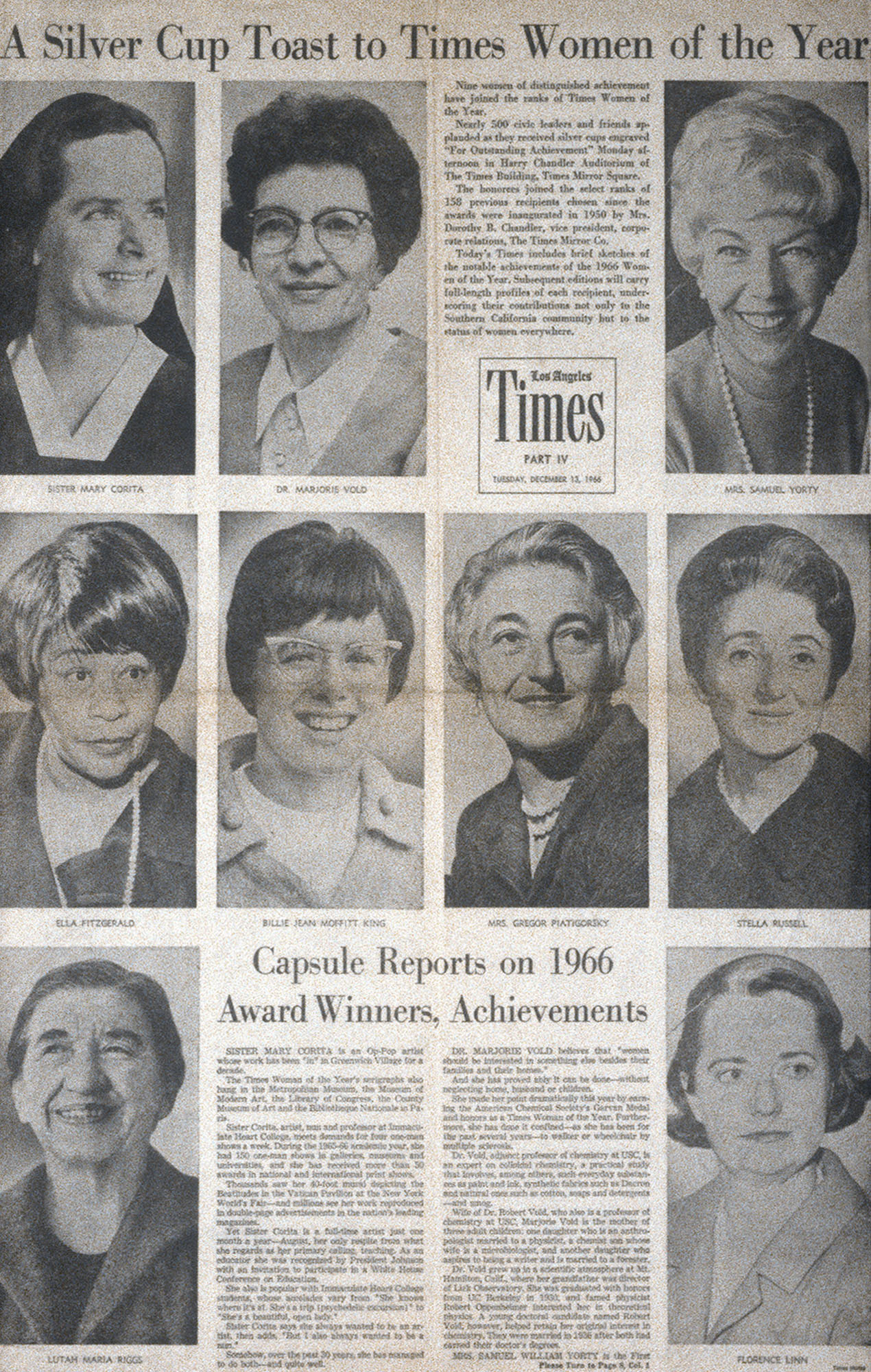 1967
Corita is on the cover of the Christmas issue of Newsweek Magazine. The IHMs encounter increasing resistance from the Archdiocese to the changes they are making under the directives of Vatican II. A commission of Corita’s is printed by Harry Hambly at Hambly Studios in Santa Clara. Corita is very impressed with the quality of his work. She sends some of her own designs to him for printing. 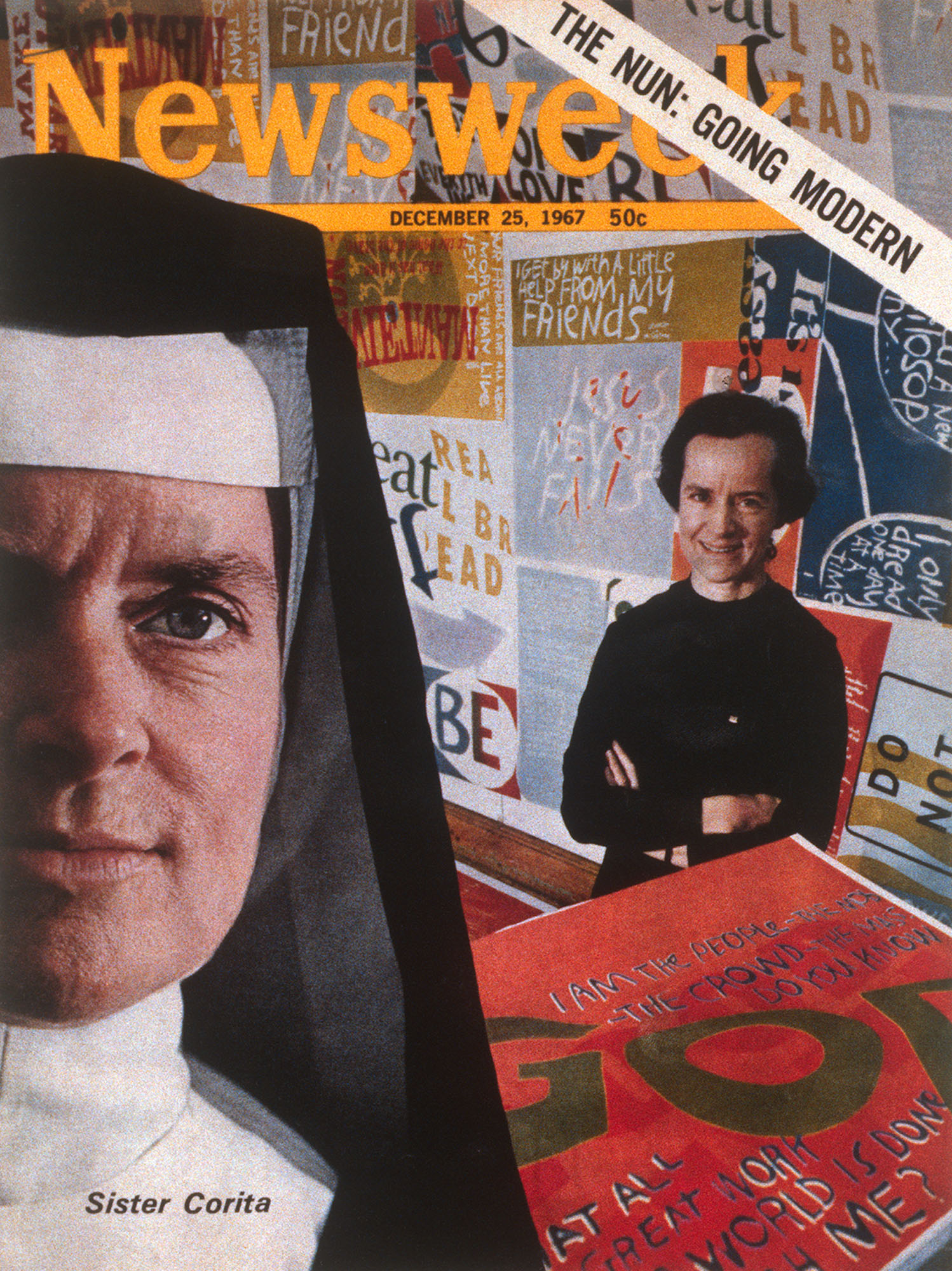 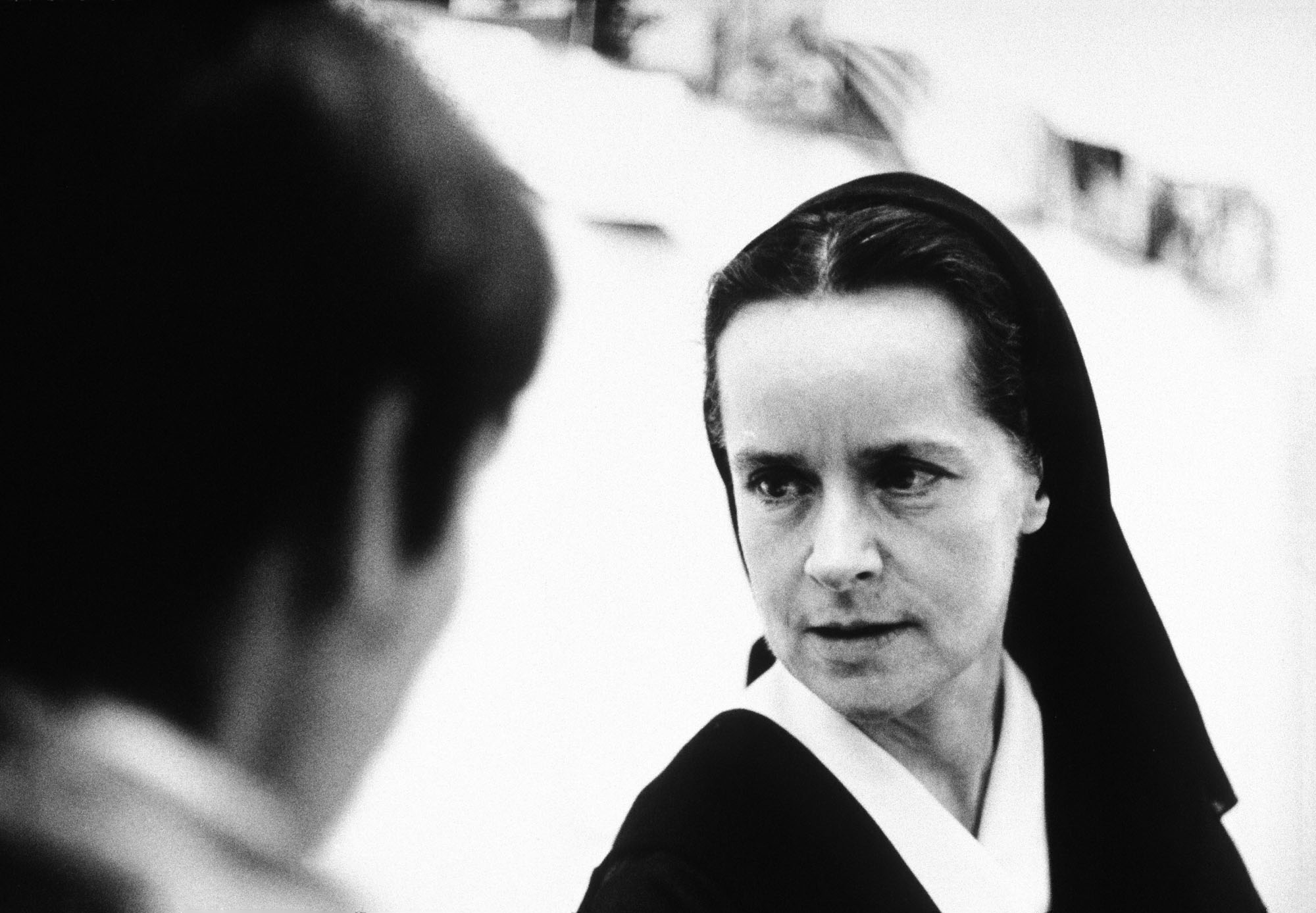 1968
Exhausted, Corita takes a sabbatical in Cape Cod, Massachusetts. At the end of it, she decides to seek dispensation from her vows and leaves the IHM Order. Corita begins sending all her prints to Hambly Studios. 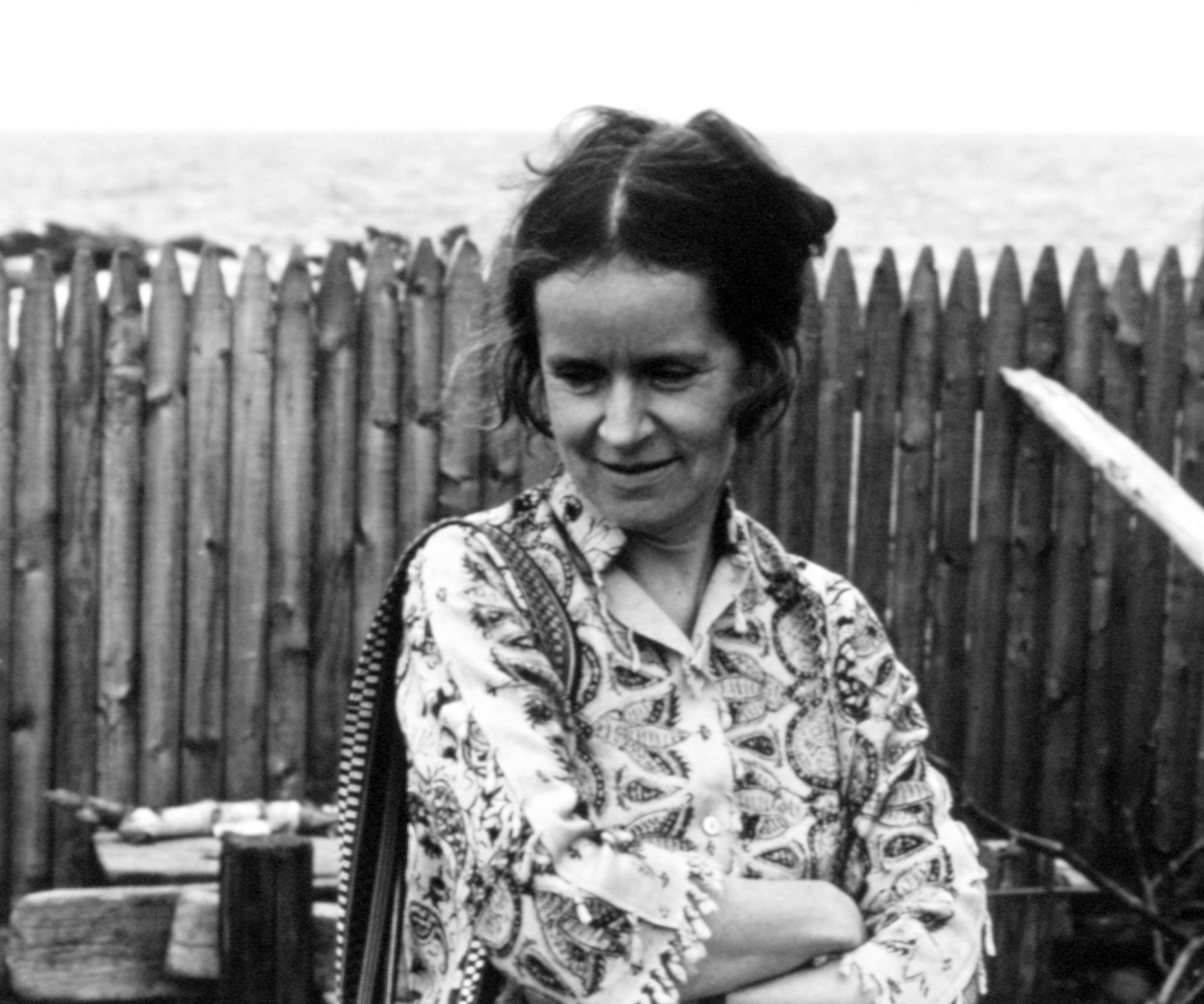 1970
Corita gets her own apartment and lives on her own for the first time in Boston. The religious order IHM reforms as an ecumenical lay community, the Immaculate Heart Community. 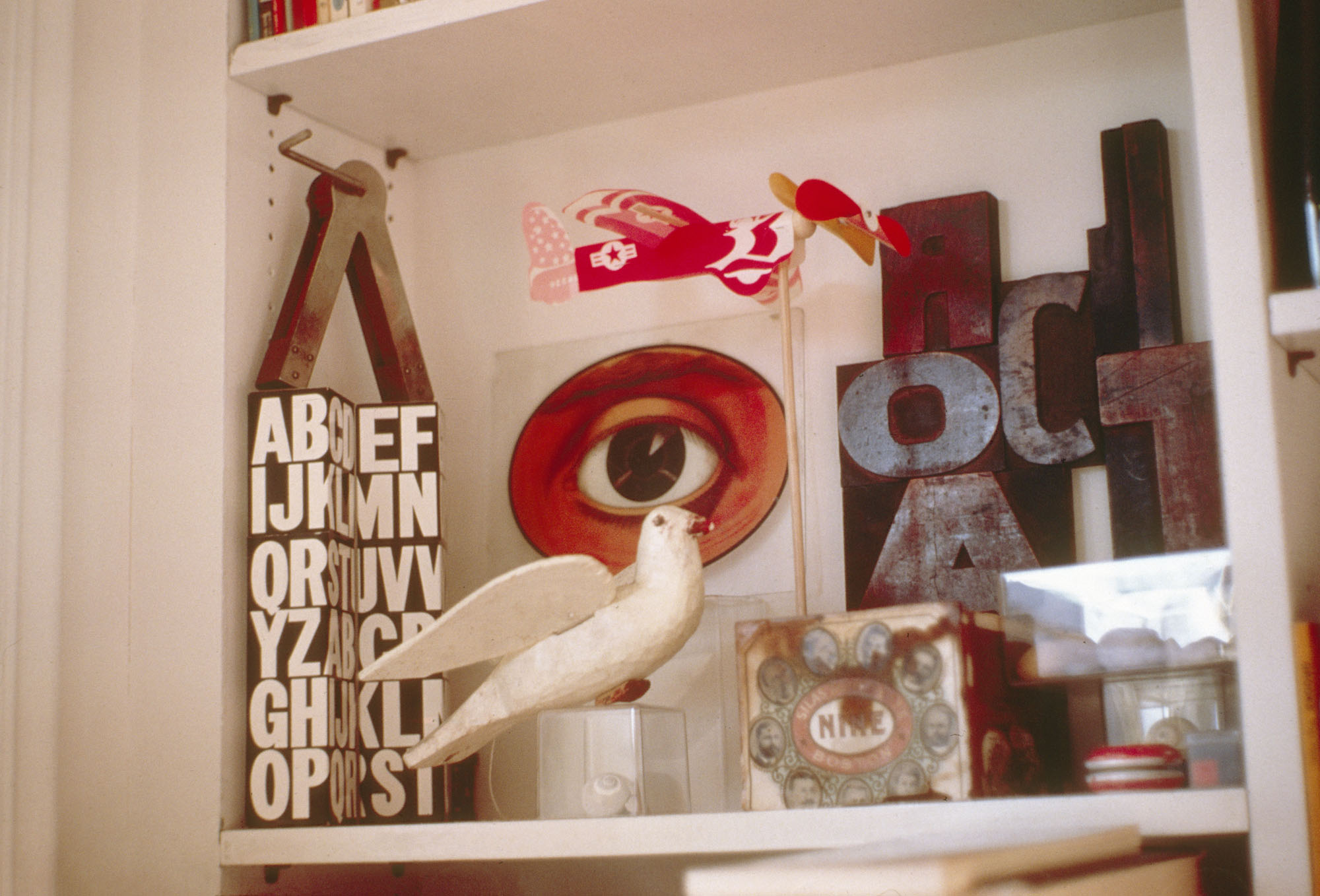 1971
Corita receives a commission from the Boston Gas Company for one of its gas tanks. Corita’s design becomes the largest copyrighted artwork in the world. 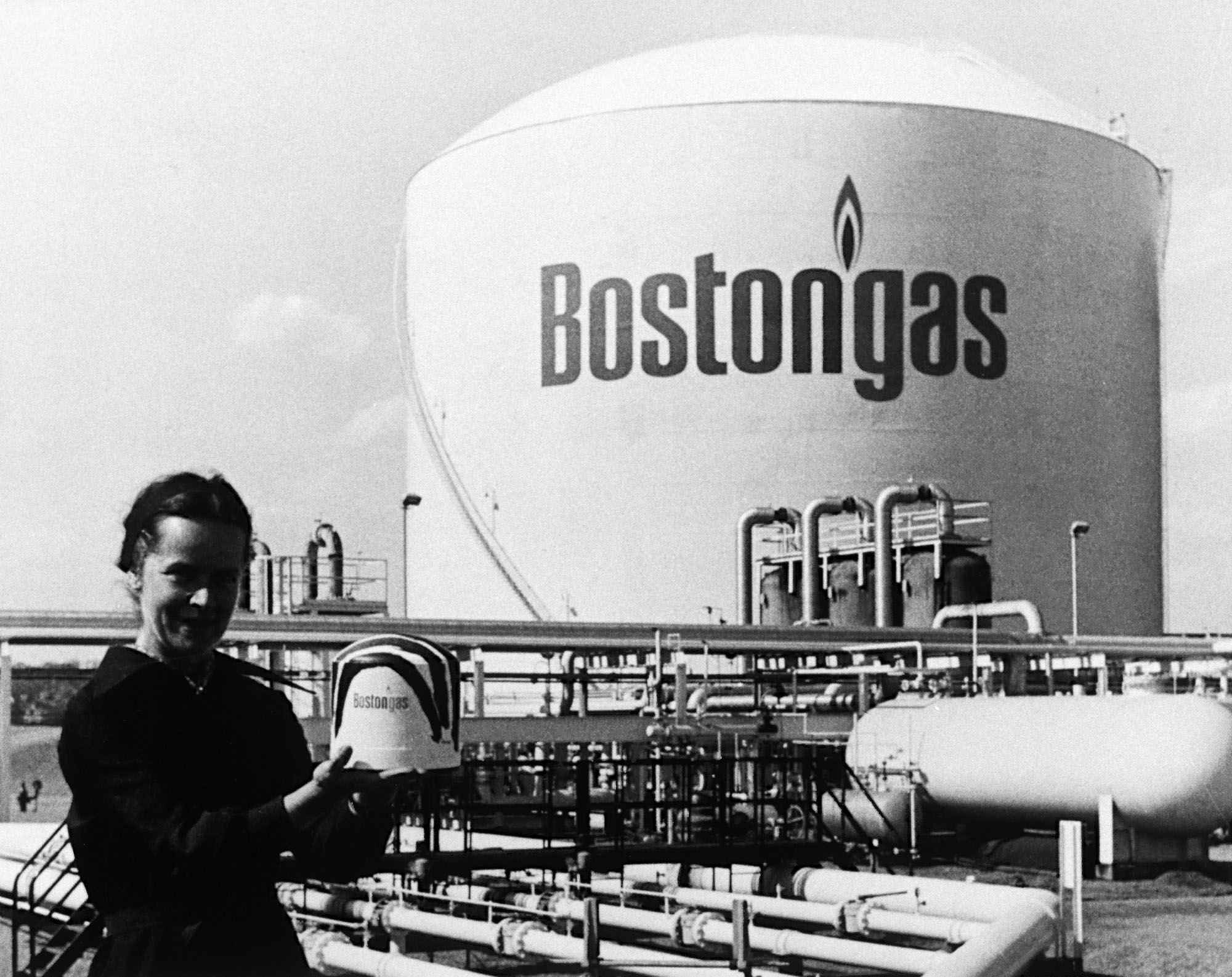 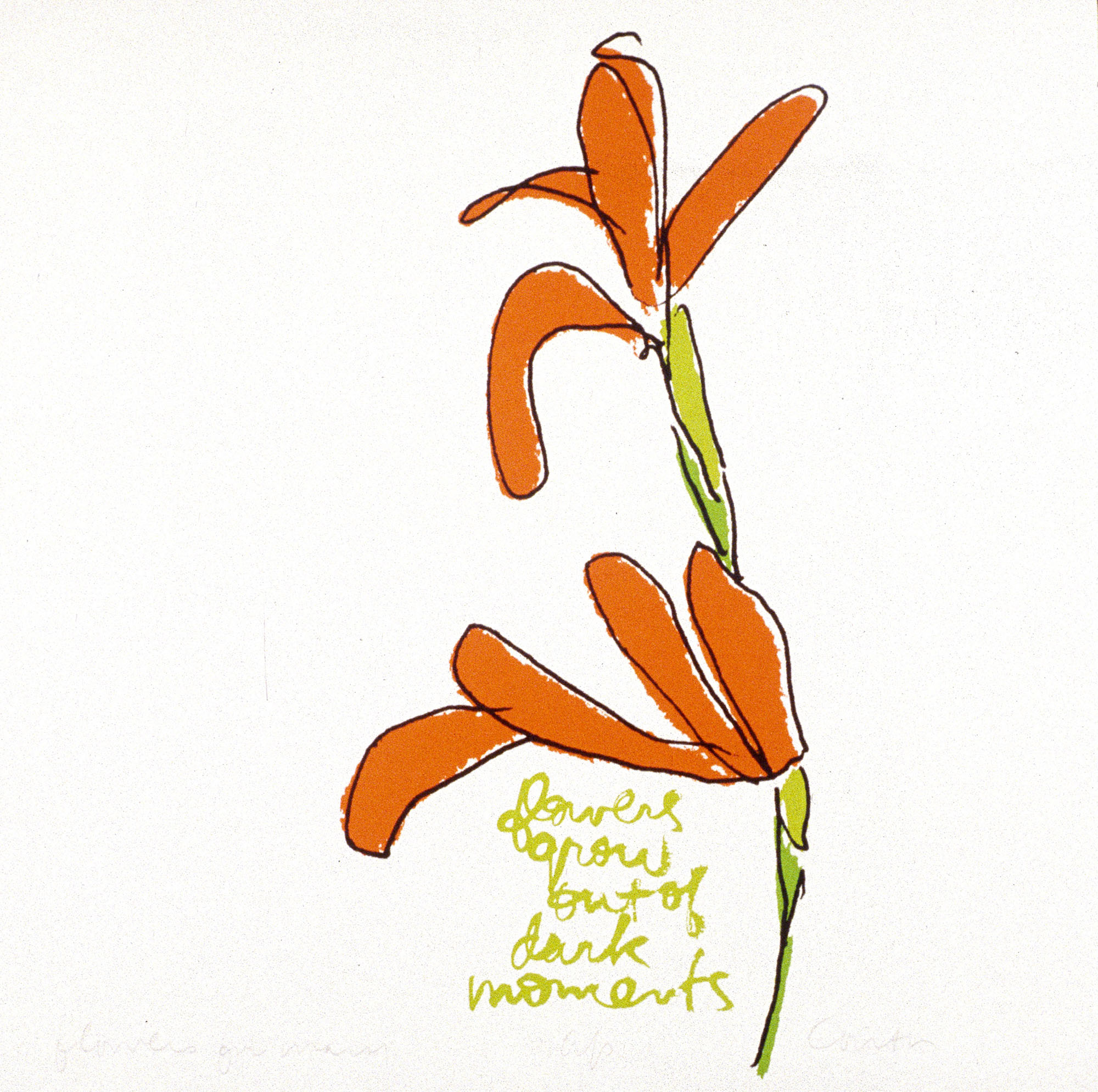 1980
A major retrospective of Corita’s work is mounted at the deCordova Museum in Massachusetts. 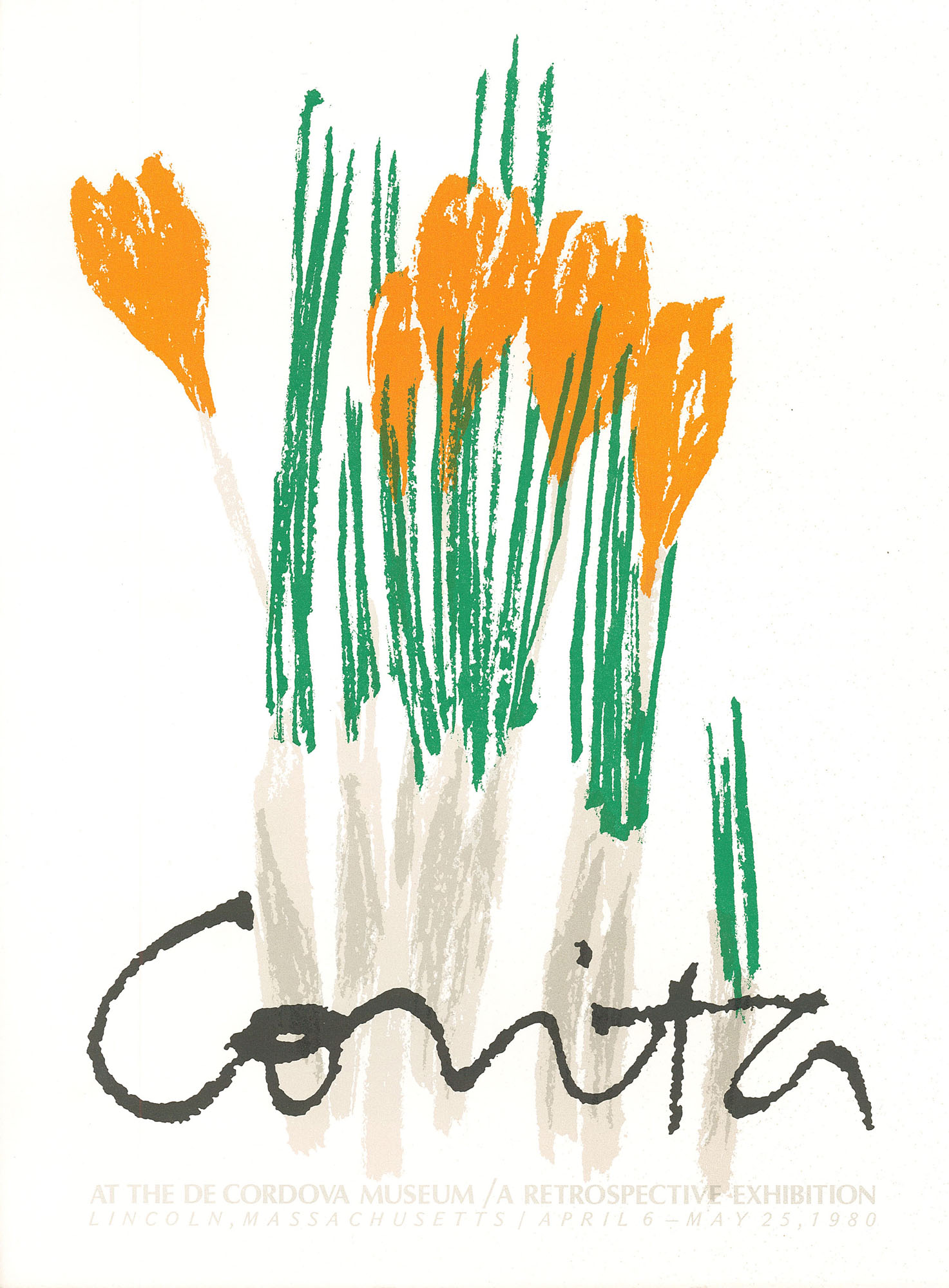 1983
Corita receives a commission from Physicians for Social Responsibility. Corita calls the “we can create life without war” billboards the most religious thing she’s done. 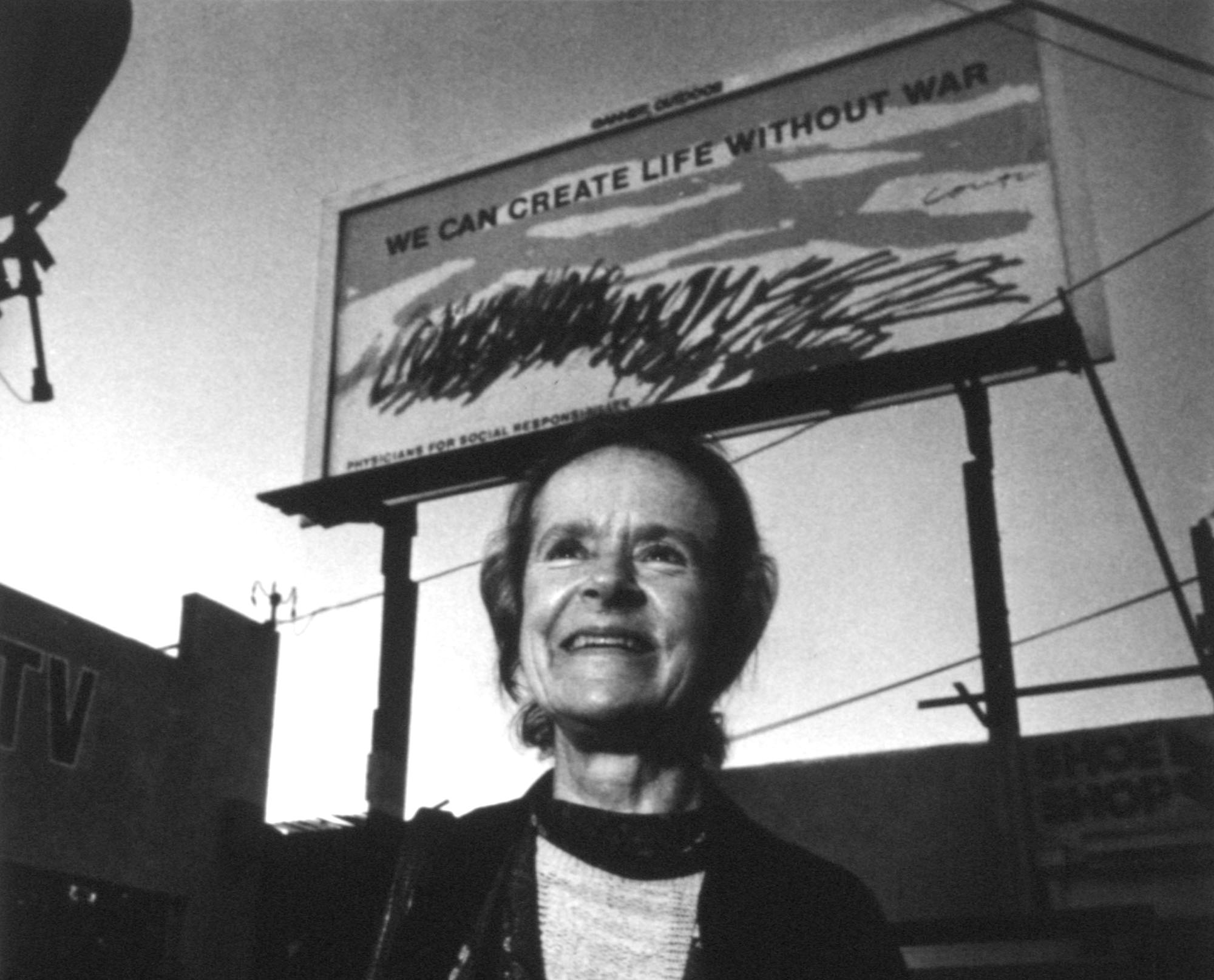 1985
Corita was asked to design a postage stamp in 1983. After several years in limbo, the design is issued. The unveiling takes place on the Love Boat. Furious, Corita refuses to attend saying that was not the kind of love she meant. She had wanted the stamp to be unveiled at the United Nations. In response she makes the work love is hard work. 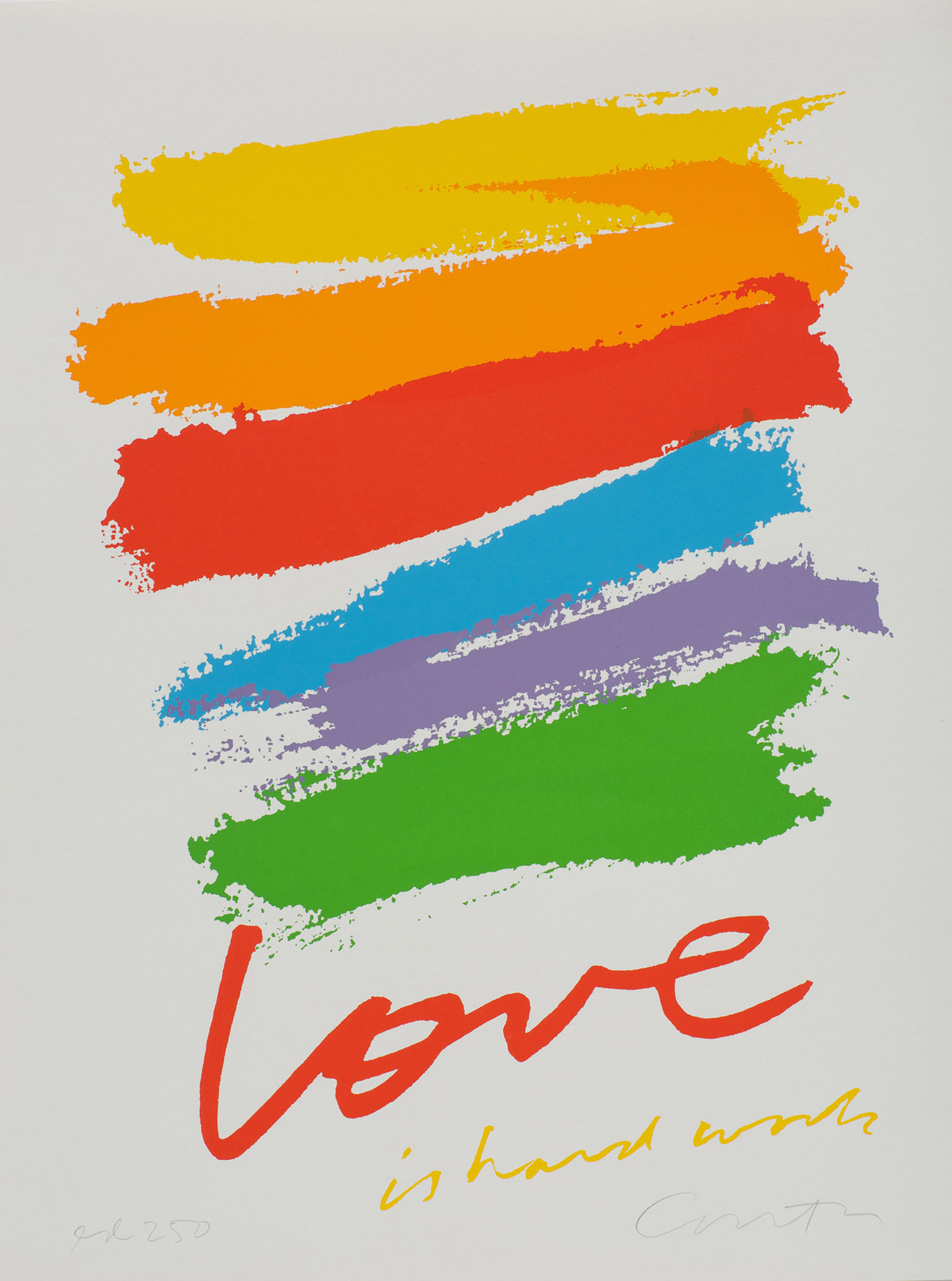 1986
Cancer is found again, this time in Corita’s liver. Corita dies from cancer September 18. She leaves her unsold works and copyrights to the Immaculate Heart Community. 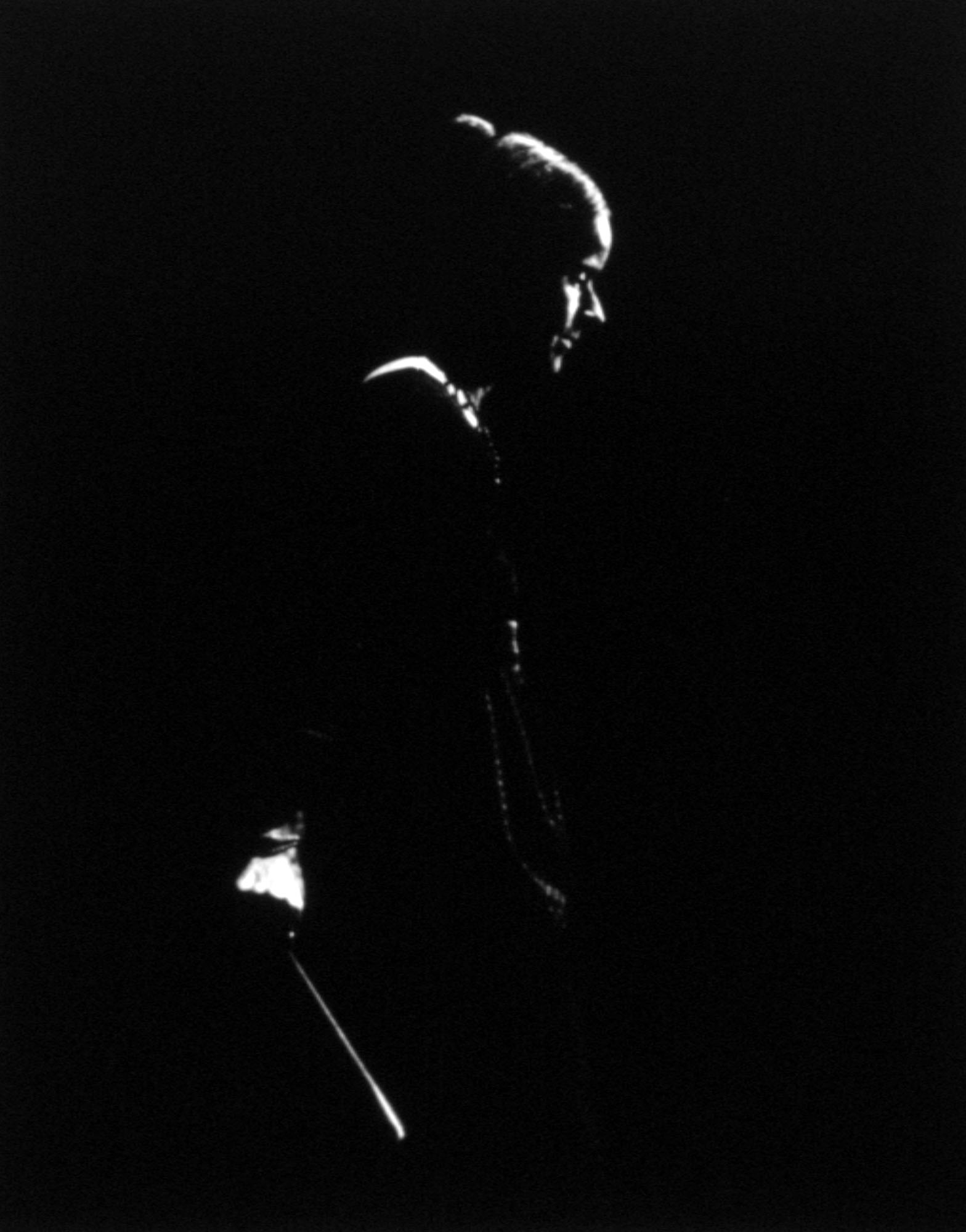 Q:
What is the proper way to refer to the artist, Sister Mary Corita, Sister Corita, or Corita?
A:
Corita. Her birth name was Frances Elizabeth Kent and Corita took the name Sister Mary Corita when she joined the Immaculate Heart of Mary. Because it was an order devoted to Mary, all the nuns had a variation of Mary in their name, but they frequently dropped it when speaking to each other. After 1968, Corita was no longer a nun and toyed with going back to “Frannie,” her childhood name, but at that time, she was already well established as an artist and decided to remain Corita. While she never legally changed her name to Corita Kent, we honor her wishes by using that name.
Q:
What were Corita’s artistic influences?
A:
Corita showed an early proclivity for art and her father encouraged her to develop it. As a young artist, Corita was influenced by medieval art she was studying. She was also very interested in the contemporary art of her time. Her early work shows some abstract expressionist influence and then she was certainly influenced by the Pop art movement that developed in Los Angeles in the early 1960s.
Q:
Why did Corita choose serigraphy?
A:
Corita began serigraphy or silkscreen printing as she was finishing her graduate degree. She thought it would be a good method to teach to her students, many of whom were pre-service teachers. Serigraphy appealed to Corita for another important reason, she wanted her art to be affordable and widely available and serigraphy allows for the production of multiple works.
Q:
Why did Corita not number her works?
A:
Along with the work being affordable and widely available, Corita did not want any of her prints to be more valuable than the others. She did not number them and sometimes she did not even record the full size of the edition. Her prints are hand-signed though and typically were only issued as one limited edition.
Q:
Why did Corita leave the Immaculate Heart of Mary order?
A:
Corita was exhausted from a trying schedule of teaching, exhibiting, speaking tours, and a newfound level of celebrity in 1968 when she took a sabbatical. Based on sources from the college and people who knew Corita, she intended to come back the following year. However, during her time off, Corita changed her mind and decided she did not want to return to the order or to teaching. She sought an official release from her vows (a “dispensation”) and she left the IHMs on good-terms. In fact, two years later when the entire IHM order decided to reform as a lay community, Corita spoke on behalf of her former sisters during a visit by the Papal Nuncio. Her affections and ties remained strong throughout her life and the Immaculate Heart Community, the lay community formed by the IHMs, was the major beneficiary of her will.
Q:
Where are her works for sale?
A:
The work of Corita Kent is commercially represented by Andrew Kreps Gallery (New York) and Kaufmann Repetto (Milan). Please contact either gallery with artwork sales inquiries.
Q:
Where are Corita’s works held?
A:
The Corita Art Center in Los Angeles has the largest collection of Corita’s works and related materials. The Hammer Museum, also in L.A., has a very comprehensive collection. Public institutions and private collectors around the world hold Corita’s work.

Corita’s Work is Included in These Institutional Collections